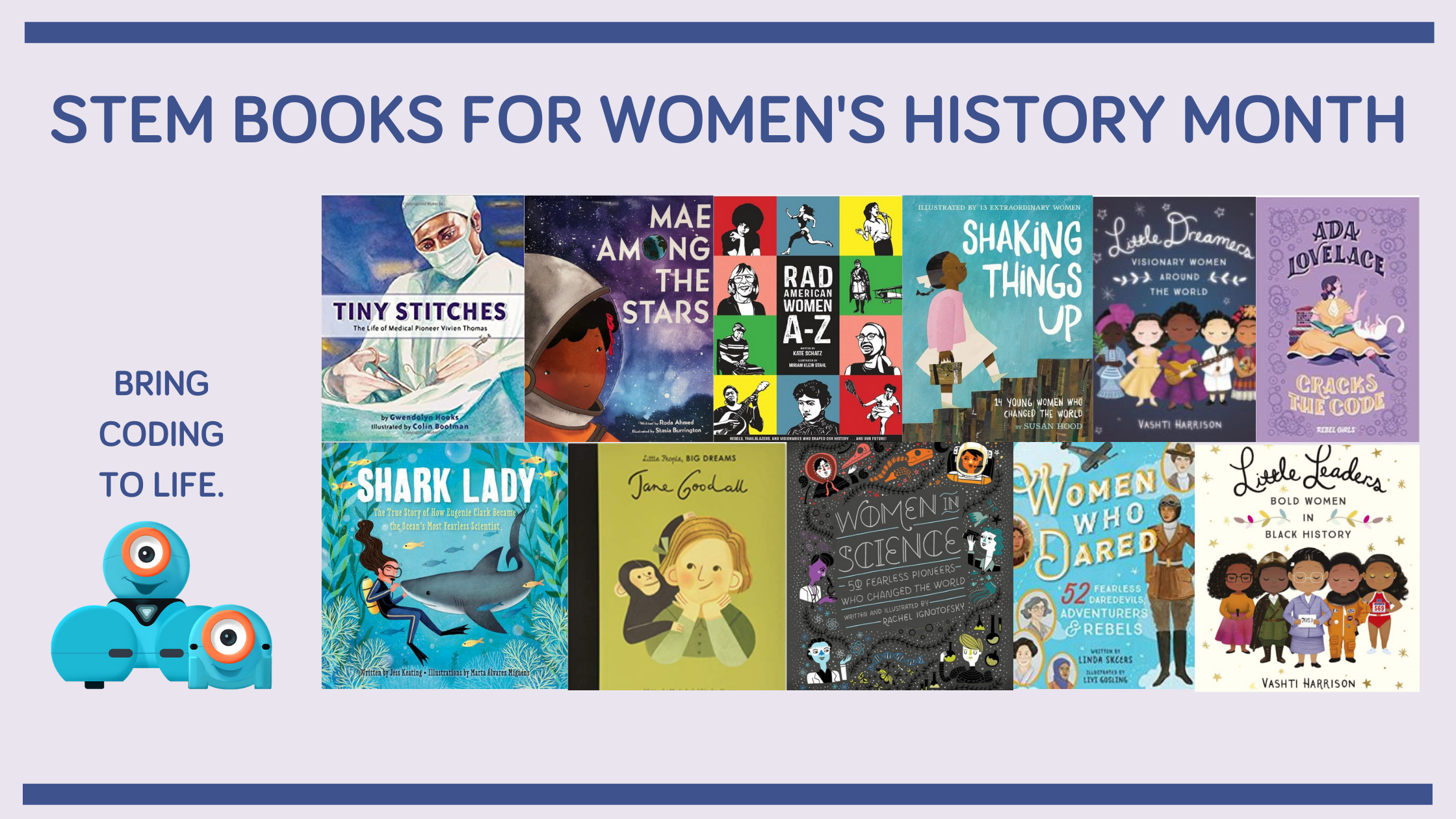 March marks Women’s History Month. It’s a time to celebrate all the accomplishments, discoveries and the ways in which the women before us continue to inspire us. Recognizing the importance of what these women have done shouldn’t be limited to just 30 days but rather a focal point that is reflected upon through the whole school year. And what better way to do that then through reading an inspiring story or two!

Inspiring the next generation of female leaders, disruptors and innovators is something that Wonder Workshop strives to do with everything we create. As parents and educators we want to help inspire our girls to know that they can be whatever it is that they want to be, but sometimes recognizing that means seeing examples of that.

With new picks added for 2022, here is a list of some of our favorite reads about the women who have impacted history and have made their mark on the world for all girls to see. Readers of all ages and genders will be left feeling inspired and even more curious about the world around them. We’re big fans of Grace Hopper around here at Wonder Workshop. She was a true trailblazer whose impact on the world of computer science must be shouted from the rooftops! Did you know that Grace Hopper coined the term “computer bug,” was the originator of machine-independent programming languages, and was a US Navy Rear Admiral? Defying expectations, Hopper was a role model for problem-solvers and renegades. This book tells her story with wit and wisdom. This is the true story of eighteenth-century mathematician, Sophie Germain, who never let obstacles stand the way of her realizing her dreams. She eventually became the first woman to win a grand prize from France’s prestigious Academy of Sciences for her formula, which laid the groundwork for much of modern architecture. Later mathematicians built on her work to build the Eiffel Tower, modern skyscrapers and bridges all over the world. The World Is Not a Rectangle: A Portrait of Architect Zaha Hadid, by Jeanette Winter

A Washington Post Best Children’s Book of 2017, Jeanette Winter tells the story of Zaha Hadid who grew up in Baghdad, Iraq, and wanted to design cities one day. She studied architecture in London and opened her own studio. As a Muslim woman, Hadid faced many obstacles. This book tells the story of her determination to succeed, and how it helped her realize her dreams. Her undulating buildings are truly breathtaking and this book serves to inspire young girls who dream as big as she did. The Future of Science is Female: The Brilliant Minds Shaping the 21st Century, by Zara Stone

From the publisher: In The Future of Science is Female, author and award-winning journalist Zara Stone shares the fascinating, complicated stories of how a diverse group of powerful women got started—from the perspective of those still working it out as they go along. Take 22-year old Dominique Barnes, a female hero of the oceans. She was worried about all the dolphins and whales killed during shrimp farming, so the marine biologist created a tasty, affordable plant-based shrimp alternative. And she’s just one of the sheroes you will discover in The Future of Science is Female. Bold Women in Science: 15 Women in History You Should Know by, Danni Washington

This collection of brief biographies explores 15 extraordinary women and how they made impactful contributions despite facing huge challenges. The stories span topics in technology, medicine, botany, and data science, and beyond! Perfect for kids ages 8-12, these stories help us see the world differently as these women did. This book features 18 women who did extraordinary things and left their mark on the world. Find examples of fearless leaders of all kinds from an array of different fields in this little but bold book. Ada made her mark in history and on the world by writing the first programming language, which was called… Ada. This story highlights various events from Ada’s life and how her imagination and creativity led to her putting the wheels into motion for the digital age almost two hundred years ago. The history books rarely give credit to all the daring, amazing, and fearless women who helped change the world and discovered new things. This book features brief biographies of those daring and rebel women who have pushed the boundaries and redefined their fields. Mae Among The Stars by Roda Ahmed, Stasia Burrington (Illustrator)

What would it be like to be floating in space? Surrounded by billions of stars and discovering new planets? Mae’s dream has always been to be an astronaut. Follow Mae Jemison’s journey in this delightful story as first African American women to travel into space. Each letter of the alphabet is connected to American woman who changed the world by never following the rules and instead redefining the rules. This collection shines a spotlight on the many women who have influenced others around the world. Women in Science: 50 Fearless Pioneers who Changed the World by Rachel Ignotofsky

Ready to be blown away by the incredible impact women have had on science? This volume is an easy and fun read for all levels. Learn new scientific tidbits about these incredibly dedicated women who overcame obstacles in their way and never took no for an answer. Shaking Things Up: 14 Young Women Who Changed the World by Susan Hood

Another inspiring biography collection of women who changed history. The illustrations, poems, back stories and timelines make this book fun, interesting, and informative. Little Dreamers: Visionary Women Around the World by Vashti Harrison

Spark young readers’ curiosity and confidence with these remarkable stories about women who dared to push the boundaries and explore the world around them. An inspiring true story about Eugenie Clark who dedicated her life to the creatures of the ocean. Born in 1922 into a world that was not kind or accepting of women in science, Eugenie’s story of grit, discovery, and passion will make any young reader eager to explore the world around them. This series is a must have. This story follows the life of Jane Goodall and her impact on not only the study of chimpanzees but her inspiring influence and dedication to animals of all kinds.

Looking for other STEM related lists? Take a peek at our STEM Recommended Reading List for Coding & Robotics that is jammed packed of motivating and fun reads or last month’s reading list, 10 Inspiring STEM Books for Girls of Color.

Have any favorites of your own? Share your finds with us on social!